Research firm GFK NOP has gone through several name changes in the past few years as it acquired and merged with other companies, but one constant has been a steady stream of studies documenting a relentless souring of sentiment towards American brands.

The latest study, reported by CNN Money, asked consumers in other countries about 60 brands, including 33 made in the U.S.A. About half of the American brands, including icons Coca-Cola, McDonald's and Nike, showed year-over-year declines in attributes important to sales growth: including likeability and consumers' inclination to say good things about the brands.

An army employment ad illustrates one of the most basic problems with U.S. public diplomacy efforts. In the course of advertising for piccolo and tuba players, the ad points out that U.S. Army bands employ more than 5,000 musicians around the world. 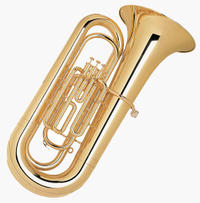 Assuming the navy and air force bands include a similar number of musicians, that means there are more people serving in military bands than in the entire foreign service, which counts just 8,000 people in the State Department and the U.S. Agency for International Development.

No wonder we're out of tune. According to the AP,  Rudy "proposed to change the Voice of America and other international broadcasters to promote the idea of freedom and U.S. values abroad, expand exchange programs with Arabs and Muslims, and increase the size of the Foreign Service."

Can we get the Democrats to pay attention to this issue, please?

According to the New York Times, the Democratic party is all atwitter about a new book (The Political Brain by Emory University professor, Drew Weston) that advises politicos to forget about issues, policies and even facts in favor of connecting emotionally with voters. According to the Times, Bill Clinton is even underlining passages for his campaigning wife. 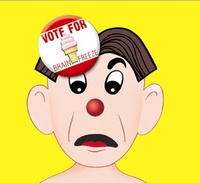 At first blush, that doesn't sound like a formula to improve political discourse.  But in fact it recalls some of the themes of Walter Lippmann's classic book, Public Opinion. Although written in the 1920s, it remains a singularly insightful analysis of how public opinion is formed.

“Opinions,” Lippmann wrote “are not in continual and pungent contact with the facts they profess to treat.” In real life, opinions float on a current of emotion that has far more force than the pictures or words that aroused them in the first place.  Over time, people know what they feel without being entirely certain why they feel it. And those feelings can be provoked by stimuli far removed from the ideas that aroused them in the first place.

Pollster Frank Luntz has made a tidy career out of helping Republicans navigate those emotional currents by cloaking their proposals in just the right words -- "death tax" rather than "estate tax," for example.  Now, of course, the wide availability of brain imaging has given the whole field a scientific aura. But its roots go all the way back to Aristotle who famously counseled that persuasive appeals could be based on the character of the speaker (ethos), the logic of the argument (logos) or the emotions of the listener (pathos).

In that sense, U.S. public diplomacy should be more "empathetic,"  i.e., connect emotionally with people around the world before trying to sell them a defense of our policies.

I've been using P&G as the easy-to-understand example of how important it is to "localize" global brands. (Some Crest toothpaste in China has a jasmine tea flavor to capitalize on the local belief that tea is good for bad breath).  Now courtesy of the Wall Street Journal, I have another good example.

Campbell's failed to sell much condensed soup in China and Russia in the 1990s because consumers there refused to spend hard cash on something they could easily make themselves. Besides, the Chinese and the Russians take justifiable pride in the quality of their homemade soups.

Rather than throw out the kettle with the soup stock, as it were, Campbell's sent cultural anthropologists into the kitchens of typical Chinese and Russian consumers. They watched how they made their soup and discovered that increasingly busy Russian and Chinese cooks would be interested in flavorful "starter stocks" they could use as the base for soups and other dishes.  You can read the whole story here (subscription required).

According to a Harris Poll for the Financial Times, nearly a third of Europeans consider the United States as a bigger threat to world peace than any other country. 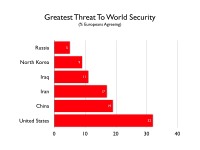 On its face, the poll confirms that the next president will face a major challenge improving America’s image abroad, starting with our main allies in Europe.

But the poll also reveals that the next president has some fence mending to do at home also. In the U.S. itself, 35 per cent of people 16- to 24 years old agree with the Europeans.

Every year on the Fourth of July, on the last page of the New York Times' business section, someone pays to reprint a copy of the Declaration of Independence. Given the prominence of John Hancock's signature, which looms larger above the others, I always thought the ad was placed by the insurance company. Maybe the Times itself does it as a kind of public service ad. 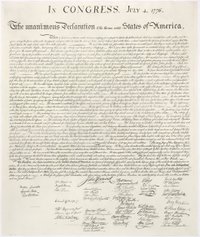 Whoever pays for it, it is indeed a public service -- a good reminder of the principles upon which the United States was founded. One of the most basic of those principles appears in the very first lines -- "a decent respect for the opinions of mankind."  One might be forgiven for wondering if America's declining reputation around the world isn't the natural consequence of forgetting to apply that principle in our dealings with other nations.

My Next Book -- A Work In Progress

I've agreed to write another book for the American Management Association. Without giving too much away, I can say that the general subject is "best marketing practices." If all goes well, it will hit book shelves in the spring of 2009.

This will be my third book for the American Management Association and I've decided to open the process a bit.  I'll be posting about my progress on the book over the course of the next year, including observations about people I meet, books I read and maybe even some of the first draft. The earlier post, "Marketing Lessons" just below, is a short example of some recent reading.

I'm doing this is the hope readers of the blog will comment as I go along, perhaps even suggesting marketing and thought leaders I should talk to or offering their own examples of best practices. What accounts for the success of our best marketing people? Do they know something the average marketeer doesn't? What can we learn from their success?

If you have thoughts, you can post them here or, if you prefer, you can send me an e-mail . Thanks in advance for your interest.

The Wall Street Journal's "Small Business Link" for July 2 demonstrates that great marketing is not limited to large companies that can afford to hire superstar marketeers. The Journal features three small businesses that built strong brands through innovative marketing. (Subscription required to see it on-line. Otherwise, go to the library and look it up on page B4.)

Steven Singer Jewelers used sophomoric stunts and edgy advertising on radio programs such as Howard Stern's to make its store stand apart from its rivals in the minds of the young males -- even at the expense of offending others. Chicken wing eating contests, anyone? How about a bubble bath in the store with models in lingerie? Lesson: build a brand for your target not someone else's.

Narragansett Beer rebuilt a brand with deep New England roots that had been allowed to wither by developing personal relationships with the people who run and frequent the bars where it's sold. But rather than trying to cover every bar from Block Island to Bar Harbor, it revisited the same bars to create "epicenters" of loyal users.  Lesson: go deep before you try to go broad.

Blendtec put everything from golf balls to iPods in the commercial blenders it manufactures, videotaped the results, and posted them on You Tube. The videos were so popular companies are paying to have their products blenderized just for the publicity value. Even the kooky rebuttals serve the cause of creating buzz.  Lesson: social media can put other people to work for your company.