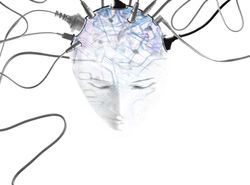 Lisa Belkin explores our fascination with the sexual wanderings of public officials in this week’s New York Times Sunday Magazine.

My interest was piqued, not for the obvious voyeuristic reasons, but because she ties it all to evolution, with appropriate skepticism.   I’m studying the evolutionary basis of human behavior for a possible new book. Knowing what’s hard-wired might help people manage large organizations, get along with their bosses, figure out their customers, etc.

Belkin points out that scientific studies say women are more threatened by a man falling emotionally for another woman than if they simply bought sex from a prostitute.  Some scientists suggest that’s part of evolution. A man straying emotionally increases the likelihood that he will take his support and protection elsewhere.

By the logic of evolution, Silda Spitzer should not have been as pissed off as Jenny Sanford.  All NY’s governor wanted was to pay for mindless sex with his socks on.  South Carolina’s governor wanted to dance under an Argentine moon with his new “soul mate.”

My tentative conclusion is that our hardwiring is constantly being reknit.  Evolution didn’t stop when we got off all fours.  For example, my wife asked her book club members what they would find more threatening – if their husband had sex with a prostitute or with a close friend.

That particular question had something to do with the book they were discussing, but what’s really interesting to me were the responses.  They were nearly unanimous in saying sex with a prostitute would be more threatening.  That's not what the evolutionary scientists would have predicted.  It seems that concerns about AIDS and other sexually transmitted diseases trumped whatever primitive survival instincts were still knocking around in their unconscious. And hubby played a lesser role in their own concept of what it takes to survive.

By the way, I posed the same question to my book club.  The men were almost unanimous in claiming they would be more threatened if their wife had sex with a close friend than with some nameless gigolo.  My guess is that modern contraceptives and DNA testing have diminished the evolutionary threat of investing in the care of a child who might be someone else’s.  The nature of the marriage relationship itself has evolved beyond a focus on popping out babies -- paradoxically, even more for men than women.

Dick,
This is a good discussion. However I think that the concern with AIDS is a primitive survival concern. If the mate has brought AIDS into the marital relationship, he abandons the promise of protection. The man is a deadman if he strayed with a friend and betrayed the emotional bond between husband and wife.
However, the wife will survive the betrayal at a higher level of evolution than before and learn to surround herself with support and protection of a nature superior to that she had with this hubby. He, on the other hand, drops down the evolutionary ladder if he goes off with the newer, more exciting model (soul mate). Upon reflection, his worth as a mate is diminished.
I agree that our hardwiring is being constantly reknit as is the marriage bond- should both partners care enough to regard their love to be worth constant attention.