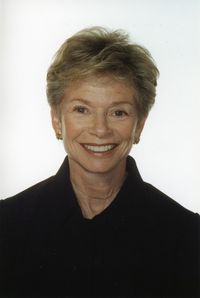 Marilyn Laurie was a colleague and my boss at AT&T for more than three decades.

She was also a source of energy, a reliable sounding board, and a loyal friend. I valued her creativity, her judgment, and her fearlessness.

I will probably never know the full extent of her support.  Executive suites can be unfriendly places, especially for those of us responsible for telling truth to upper management and dubious boards, but she was always a caring and understanding boss.

She influenced my life more than anyone since my parents.  I'll miss her.

AND SENIOR AT&T EXECUTIVE, DIES AT 71

Marilyn Laurie, one of the founders of Earth Day who went on to become the highest ranking woman in AT&T’s history to that point, died at her home in Manhattan on July 14.  She was 71 and had been battling brain cancer for the past year.

Laurie was a stay-at-home mother of two young girls when she saw a notice in the Village Voice inviting people to a planning meeting for what would become Earth Day. Attendance at later meetings dwindled until she was one of only five people left. She assumed responsibility for communications and eventually convinced then Mayor John Lindsay to close Fifth Avenue to cars on the first Earth Day in 1970 so the crowds could hear speakers such as Paul Newman and Ali McGraw. “Woody Allen once said 80 percent of success in life is just showing up,” she once said. “My experience is that it’s really about sticking around and sticking to it.”

Her success in helping launch Earth Day led to a freelance assignment to write an environmental supplement for the New York Times.  That in turn led to a job offer from AT&T, then the world’s largest company.  She joined the company in 1971 and was assigned to create employee environmental education programs.

By 1987, she had risen to the company’s highest ranks. As executive vice president of public relations and brand management, Laurie was the first woman to join AT&T’s 10-person Executive Committee and counseled the company’s CEO on issues affecting its reputation, while also directing external and internal communications. In addition, she was chair of the AT&T Foundation, overseeing more than $40 million a year in grants to educational, social service and arts institutions.  Laurie retired from AT&T in 1998 to form Laurie Consulting, Inc., which developed branding and public relations strategies for corporations and non-profit organizations.

A native New Yorker, Laurie received her undergraduate degree from Barnard College and her MBA from Pace University.  She was vice chair of Columbia University, a trustee of  New York-Presbyterian Hospital, and a director of the New York City Ballet and New Visions for New York's Public Schools. She had also served on the executive committee of the New York City Partnership.

Laurie was past president of both the Arthur W. Page Society and the PR Seminar, professional associations of the world’s most senior corporate communications executives.  She received numerous industry awards, including the Women in Communications Matrix Award, the Tribute to Women in International Industry Award, the Human Relations Award of the American Jewish Committee, the Women's Equity Action League Award and other public relations awards. She was named to the YWCA Academy of Women Achievers, was among the first named to the National Honor Roll of Women in Public Relations, and was the first woman to receive the Arthur W. Page Society’s Hall of Fame Award.

A memorial service is planned for September.

Dick, what an outstanding woman. Would love to have known her, but feel I do by reading this obit.
Beadle

Dick, I know what great friends you were with Marilyn and your obituary was wonderful. I wrote a blog on her today, thought you would enjoy this memory of a fabulous woman. Mary Lou Quinlan
http://justaskawoman.com/wsnty/?p=752