Sometimes, if asked, "What are you going to believe -- what I'm telling you or your own eyes?" the right answer is to punt.

For centuries, magicians have demonstrated how our eyes can deceive us.  Now there's a video on You Tube that shows just how programmed we are to fill in blanks when information is contradictory or ambiguous.

Just looking at someone's mouth movements affects the way we hear what they are saying.

Watch the split screen with your eyes closed when it comes up to prove it to yourself.

The phenomenon is called the McGurk effect after one of the author's of a paper that first described it back in 1976. For more, see this Wikipedia entry.

I've categorized this under politics because I have the sense magicians are not the only people exploiting the phenomenon.

A tip of the hat to my son Chris who put me on to the original video.

A friend recommended that I read Richard Hofstatder's 1964 essay, "The Paranoid Style in American Politics."

If the measure of a classic is its timeless salience, Hofstatder's piece clearly qualifies.

The very first sentence could have been written about this week' mid-term elections.  "American politics has often been an arena for angry minds," he wrote more than 45 years ago.

That's Hofstatder above, between two exemplars of his theory.

He calls the politics of angry minds "paranoid," not in the clinical sense, but because it is characterized by "heated exaggeration, suspiciousness, and conspiratorial fantasy."  It's as if he was channeling Fox News decades before it went on the air.

Of course, Hofstadter -- who died in 1970 -- couldn't have been writing about the Tea Party. But he seemed to anticipate its members' underlying motivation, which he summed up just as neatly.  "They feel dispossessed," he wrote.  They believe that "America has been taken away from them and their kind."

"The old American virtues have already been eaten away by cosmopolitans and intellectuals," he wrote. "The old competitive capitalism has been gradually undermined by socialistic and communistic schemers."

And if all that wasn't enough prescient enough, Hofstatder went on to warn that "the mass media" would enable modern political paranoids to make their villains "much more vivid than those of their paranoid predecessors, much better known to the public." And this was before cable TV and the Internet.

To be fair, Hofstadter wasn't so much prescient as steeped in history.  He could predict what would happen because he saw what had already occurred.

The political paranoid were suspicious of Catholics in the 19th century; in the 21st, Muslims have taken their place. Yesteryear's plot by international bankers to take control of the world's money supply has morphed into a scheme by UN scientists to undermine Western capitalism.

In the interests of fairness, I should add that Hofstedter didn't think the political right has a corner on paranoia. He saw signs of it among the Black Panthers as well as within the White Citizen Councils of his day.

Even paranoids have enemies, it's said.  These days, it's become obvious that they have plenty of company too. 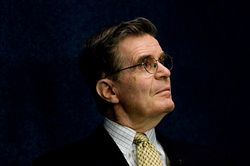 A good friend pointed me to Jeffrey Sachs' tribute to Ted Sorensen in today's Huffington Post.

Sorensen, who passed away over the weekend, is probably best remembered as JFK's speechwriter, but as most of his obits make clear, he was much more.

He not only put Kennedy's ideas into memorable words, he helped shape the ideas themselves (which, by the way, is what all really good speechwriters do).

What prompted my friend to send me the link was the way Sorensen dealt with this whole notion of "the other" in a speech he wrote almost 50 years ago. Even then, as she noted, he "realized that accepting different cultures and understanding and acknowledging each person's basic humanity was the only way we'd ever have world peace."

The specific lines that drew her attention are worth reprinting here:

"Let us not be blind to our differences, but let us also direct attention to our common interests and the means by which those differences can be resolved. And if we cannot end now our differences, at least we can help make the world safe for diversity. For in the final analysis, our most basic common link is that we all inhabit this small planet. We all breathe the same air. We all cherish our children's futures. And we are all mortal."

Kennedy/Sorensen, of course, were referring to differences between the U.S. and the Soviet Union.

But on the eve of another election, in the wake of successive rallies on the National Mall, amidst partisan rancor and free-floating anger, it might be an appropriate moment to ask ourselves if the search for common interests might not apply within our borders just as it did without, those five decades ago.