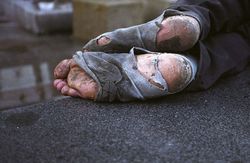 A friend who is a regular reader of this blog commented on yesterday's post.

Looking at the illustration of a toothless, dirty man, "I felt more instinctive pity than fear or disgust," he said.

Knowing the source of that comment, I was not surprised. He is an uncommonly empathetic person. In fact, many people are.

Studies show that most of us feel pity for the homeless and want to help them.  On the other hand, most of us are repulsed by drug addicts and want them to go away. Which do the feet to the left belong to?

The man in yesterday's posting could have been either or both. The difference in our reaction seems to be based on whether we see him as "friend" or "foe" and whether or not we believe he's responsible for his condition.  For a more technical explanation, see a paper by Susan Fiske here.

We are hardwired to make categorical judgments about other people, i.e., to stereotype them. Most of those judgments happen unconsciously and automatically. But the results are not always the same. People come to different conclusions based on their social context, culture, and experience.

My friend, for example, expanded on his initial comment in a later email. "I had a fortunate experience," he explained. "On the bus between Jerusalem and Tel Aviv a few years ago, I was seated behind a degenerate-looking man.  He had no teeth, a wasted body and an annoyingly wet hacking cough that would not stop.  Like a true New Yorker, I was repulsed and thought about moving away from him.

"Very soon thereafter a beautiful young woman got up from her seat, reached into her backpack, took out a bottle of water and offered it to the man.  He accepted it, drank and stopped coughing.  I was immensely impressed by the generosity and compassion of this woman's action.

"The thought struck my mind that the man could have been someone's grandfather, a war hero or even a survivor of the death camps.  It was one of those coincidental, life-altering events for me.  From then on I have viewed people in similar distress far differently."

And that was exactly the point of my first posting -- biology is not destiny. Our experiences can trump our instincts if we're open to the possibility.