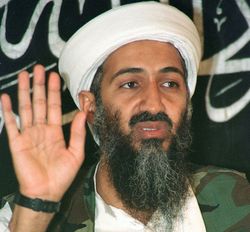 Erik Nisbet, at Ohio State University, was surveying attitudes toward Muslim-Americans when a team of Navy seals dispatched Osama bin Laden to party with virgins in the great beyond.

The before and after data represented a unique opportunity to gauge how Bin Laden's death affected American attitudes toward Muslims. The results were surprising enough to warrant a separate report, titled "The Bin Laden Effect."  In short:

Positive perceptions of Muslims plummeted. For example, in the weeks before bin Laden’s death, nearly half of respondents described Muslim Americans as “trustworthy” and “peaceful.”  But only one-third of Americans did so after the killing.

And they were less likely to oppose restrictions on Muslim Americans’ civil liberties.

Political liberals and moderates were the most likely to change their attitudes toward Muslims, becoming more like conservatives.

The killing of Bin Laden created a "focusing event" that led to an extremely high level of news coverage and public discourse about terrorism and Islam in general for several weeks.

All that news coverage reminded people of the 9/11 attacks and primed them to think about Muslims in terms of terrorism.

We experienced something of the same effect when I was at AT&T (though we didn't have a name for it).

One of our researchers -- Bruce Jeffries-Fox -- noticed that favorable attitudes towards the company declined when we were the subject of negative news. That wasn't terribly surprising. (And you may recall that this was frequently the case in 1996 and from 1998 - 2002.)

But his next observation was startling: favorable attitudes declined even more if we happened to be running a higher level of advertising at the time.

It seems that advertising -- like price discounts or warm and fuzzy messages -- reminded people of the bad news. No amount of good news could counter-balance the bad.

The data was so compelling that even our advertising colleagues took notice and tried to adjust their media schedules when trouble brewed.

The larger lesson: attitudes are contextual. That's why individual readings should always be taken with a grain of salt.