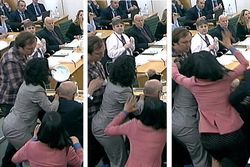 I'd like to promise that this will be my last post on the News Corporation hacking and bribing scandal.

But I've noticed that traffic to this blog has doubled ever since I began writing about it.

Since the august New York Times seems to be unembarrassed riding the same wave (they published five separate news stories, plus an op ed just today), who am I to scorn popular opinion?

So here are a couple of interesting links:

Scientific American puts Mr. Murdoch's travails within the context of evolutionary psychology. We smile when people we envy have problems because it eases our psychological pain.

The Harvard Business Review thinks it's all an example of the moral hazard businesses expose themselves to when they hire third parties. So much for outsourcing.

Over at the Wall Street Journal, Holman Jenkins argues that the hacking scandal "leaves the world a better place, just as Nixon did with Watergate," because it uncovers even larger misdeeds by the London police. I'm not making this up.

Finally, I was struck by the coverage given to what was widely and inaccurately described as the "left hook" Wendi Murdoch delivered to the pie thrower who rose from the audience towards the end of the parliamentary hearing.

It appeared in almost every story yesterday afternoon and today.  (Best headline: "Crouching Tiger, Hidden Wendi.")  See photo sequence nearby.  That's Wendi in the pink jacket, delivering what is clearly a right cross.

Some people speculated that the Murdochs themselves were behind the whole incident.  Indeed, it displaced what would have been column inches on her husband's doddering performance and was the only good break they had all day.

But to me it offers further proof that coverage of this scandal belongs in the Sports section, along with a lot of other stories that purport to be business stories.