The scandal that can't stop titillating 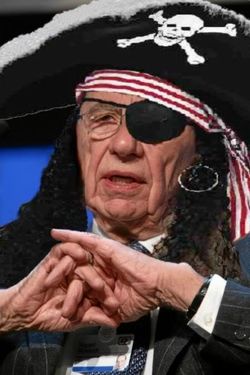 How did the News of the World scandal so quickly threaten to become Rupert Murdoch's Waterloo?

If there are any lessons to be drawn from this transatlantic kerfuffle, they may lie in the answer to that question.

After all, in the grand scheme of things, the News of the World was little more than a remote, though raucous, backwater of the Murdoch empire.

Finding those tabloid waters polluted was about as surprising as discovering SuperFund sites along the New Jersey Turnpike.

Still, it's the scandal that can't stop titillating. Just this weekend, heads rolled from New York to London at both News Corporation and Scotland Yard, the FBI opened an investigation, Congress promised hearings, Parliament began inquiries.

To be sure, hacking into people's voice mail is not only illegal, but wrong. So is bribing a Bobby -- or worse, the people to whom they report.

But why is it such a Big Story on both sides of the Atlantic?

I'm no fan of Fox News or the New York Post.  And I preferred the Wall Street Journal before it became a general interest newspaper (though there are things I still admire about it).

But I suspect that what feeds this story is the thirst among some people for further confirmation that Rupert Murdoch is the reincarnation of Jack Sparrow -- a swashbuckling and ruthless buccaneer on the waters of modern media.

But psychologists have essentially proven that we human beings naturally search for information that confirms our beliefs and ignore what contradicts them. Anthropologists have even suggested that confirmation bias, as this tendency is called, serves an evolutionary purpose -- it makes for stronger arguments.

In fact, two cognitive scientists have even speculated that our vaunted reasoning faculties are not designed to enable us to find the "truth" about anything, but to argue more forcefully whether we're right or wrong. Winning arguments is a distinct advantage if you belong to a species that depends on clans and tribes for survival.

"Reasoning has evolved and persisted mainly because it makes human communication more effective and advantageous," they write. "The function of reasoning is .. to devise and evaluate arguments intended to persuade."

The News of the World scandal has legs simply because it's such a rich and delicious vein of bias-confirming intelligence.

AT&T's former CEO, Bob Allen, played that role back in 1996 when people were worked up about downsizing and corporate greed.

And, as was the case back then, Mr. Murdoch won't be excused from the barrel until someone or something else displaces him as a richer source of bias-confirming argumentation.

Murdock created a tone at the top where it was ok to hack into people's personal voice mail...even if it was the voice mail of a missing child...and it gave false hope to parents. His editorial team threatened political people at all levels with the threat of public humiliation if they crossed his empire. This was a lot mor complicated and intrinsically wrong than "simply paying off a bobby" and listening in on phone calls. Have we all become so cynical that we accept these practices as just part of doing business. We need to get back some of our moral outrage at tgese practices or sociiety is going tonbecome more corrupt. And Comparing him to Bob Allen in any way is a major insult to a basically good guy who caught in a changing business cycle.

Have we become so cynical that

Hi. Kathy. You kind of made my point. Let's start with your first sentence, "Murdoch created a tone at the top ..." I'm willing to believe that -- God knows I've heard and read it often enough. I'm suggesting that a lot of people start with that belief and then ignore or discount any evidence to the contrary, rather than weighing all the evidence pro and con before coming to a conclusion. I used Murdoch as an example because he is such a polarizing figure. And the only point of comparison with my friend Bob Allen -- who is indeed one of the most decent men I know -- is that he too was a polarizing figure way back in 1996. I know he wasn't greedy and heartless because I had personal knowledge to the contrary. As for Murdoch, I have no idea, and I'm willing to examine evidence on both sides of the question.

Dick, I think you've touched on only one reason for this story having long legs. But, the main reason this has continued to gain both public attention and generate more press is the juicy tabloid nature of the story. Rich and powerful people involved in scandalous behavior, as well as possible police corruption at the highest levels, not to mention the linkage of top government officials to Mr. Murdoch are enough to drag people away from their favorite reality shows. And, we know the British love a good scandal.