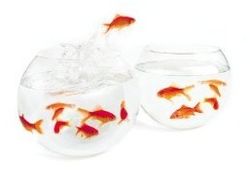 What does it take to be a global business leader, to jump out of one pond into another?

The Harvard Business School's "Working Knowledge" blog has a good posting on the essential qualities required.

It comes courtesy of Bill George, currently a professor of management and ethics at Harvard and formerly CEO of Medtronic.

But with apologies to Prof. George, who has probably forgotten more about globalization than I will ever know, I think it misses the single quality that underlies all the ones he lists.

Empathy is hard-wired into all of us. Scientists have even found its biological seat in the neurons of our brain. But its natural range is relatively short. We have little trouble empathizing with members of our immediate family or close friends. But empathizing with people outside that tight circle is more problematic.

Learning to draw that circle larger is possible, however. Empathy can be developed and refined. That's the real secret to business success. And it's even more important when the ratio of difference to familiarity is high, as in global markets. 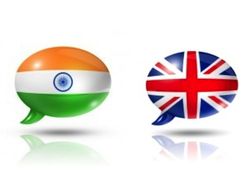 Most executives heading for an overseas assignment take foreign-language classes to learn at least a few "survival words."

Being able to ask "Where is the (hospital), (taxi stand), or (toilet)?" in a foreign language is more important than it seems when you don't need one.

People who are already proficient in a language other than their own have discovered the importance of another skill -- unlearning their natural accent.

Nearly everyone who learns a language after the age of about 13 has an accent.

(The technical term for these two "th" sounds are respectively "voiceless and voiced phonemes," and there's a good summary of the pronunciation challenges those learning English face here.)

Unfortunately, studies suggest that the mere presence of an accent influences how we perceive people. Someone with a tony British accent is assumed to be intelligent. Someone with an Indian or Pakistani accent is considered less educated than they might be.

Someone may speak flawless English grammatically, but an accent creates the impression that he or she is less capable than someone without an accent.

I wish we could just see beyond accents to the individuals who speak with them.

Meanwhile, in the course of giving a talk about OtherWise this morning, I discovered that the field of accent reduction is booming.

It's not quite at the level of rhinoplasty yet, but the American Speech-Language-Hearing Association has identified it as "a growing niche in corporate America." By some measures, the practice is projected to grow by more than 20% over the next decade.

Physicians who are at the top of their profession want to lose the accent they acquired as a child in India. Executives want to shed the last vestiges of their Brooklyn, or Arkansas, or wherever, youth.

I'm all for it if their accents truly inhibit their ability to communicate and their chances of career advancement.

But I have to admit that part of me cringes at the idea of homogonizing all those rich accents into the neutered voice of easy listening radio. 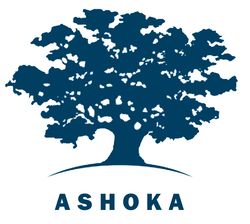 A friend recently introduced me to Ashoka, an organization that, for 30 years, has been identifying and supporting some of the world's leading "social entrepreneurs."

Social entrepreneurs bring energy, smarts, and passion to solving entrenched social problems. Ashoka is supporting their initiatives in areas ranging from education and youth development to farming and financial services.

One of those initiatives is designed to help children develop their natural sense of empathy, which Ashoka considers "a core 21st century skill." Its rationale is straight-forwaed:

"We know that a child who masters empathy at the age of six is less likely to bully ten years later, and that, for students, having one supportive relationship with an adult outside the family can be the difference between success and failure as an adult. And we know that far from being a "nice-to-have," empathy – and the various skills it entails – is increasingly critical to our success at home, in the workplace, and in the world."

That happens to be the theme of OtherWise, so I was happy to sit down for an interview that is currently running on the Forbes web site.  For the same reason, I'm happy to plug the empathy project's web site, especially the excellent survey of current research on empathy. 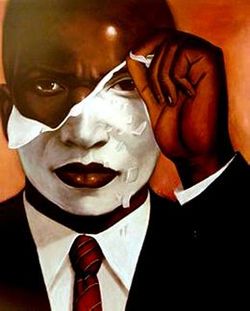 I gave a talk about OtherWise at the local library the other day.

Despite tough competition (a Yankees playoff game, a local town council meeting, and the second presidential debate), enough of my friends showed up to fill most of the room.

In the Q&A session following my remarks, someone asked if the book's theme was still relevant to most large companies.

Indeed, most companies have come a long way in attracting people of color to their rolls. While executive levels are still largely white and male, women and "minorities" are making important inroads at many companies. And many companies have established "employee resource groups" to give career support to people who have been historically under-represented in the workplace.

But as a recent survey by the Center for Talent Innovation suggests, we still have a long way to go.

More than a third of African-Americans and Hispanics and almost half of Asians say they "need to compromise their authenticity" to conform to their company's standards of demeanor or style. Many feel like outsiders in their corporate culture.

African-American men and women struggle to be assertive without reinforcing stereotypes of the "angry black." Indian-Americans have learned to avoid wearing clothing that might be considered "too ethnic."

Many companies take justifiable pride in their strides toward building a multicultural, multiracial workforce. But, as long as some employees feel like imposters in the workplace, it's a little premature to think the job is over. 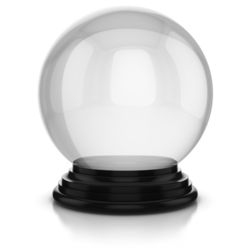 My fearless prediction for 2013: no matter who wins the presidency, he will propose a wholesale overhaul of the federal tax system.

A tax overhaul will provide the political cover to cut spending, increase revenue, and shift the tax burden. (Tax deductions and exclusions are really a form of spending; in fact, they cost the government more than $1 trillion a year.)

Of course, Obama and Romney will approach a tax overhaul with different goals.

Romney will want to shift the tax burden away from the "job creators" in the belief that a rising economy will eventually benefit everyone. He says he wants any changes to be revenue neutral, but he's said a lot of things over the last six or seven years. Tax reform will give him the political cover he needs to stay off Grover Norquist's naughty list.

Obama will want to shift the burden towards upper income households whose incomes have grown disproportionately in recent years. He's already said he intends to balance spending cuts elsewhere in the budget with modest revenue increases on the wealthiest.

The chart below, from the Century Foundation, illustrates the point from which the whole effort will start. 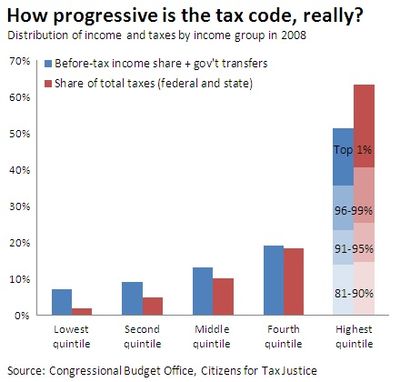 Note that, except for the lowest two quintiles, each income group's share of total taxes is roughly the same as their share of before-tax income. (Government transfers, such as social security and Medicare payments, as well as the value of food stamps, are included as income in the graph.)

It's a progressive system, but not the picture of free-loading that Romney presented behind closed doors.

A fuller analysis would show that taxes are less progressive than they used to be because of recent tax cuts that largely benefited the wealthy, payroll tax increases that have a greater impact on lower incomes, and an increase in government transfers to wealthier families (e.g., Medicare and Social Security payments that are not means-tested).

This election will determine how the relative heights of these bars change over the next few years.

Ale to the chief 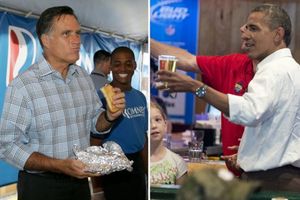 People supposedly vote for the candidate they'd most like to have a beer with.

So tavern photo ops have become a campaign staple, as President Obama demonstrates in the photo above.

Governor Romney, a Mormon, says he hasn't had a beer since he was a teenager. But he demonstrates his "regular guy" creds by scarfing hot dogs every chance he gets. Bending elbows with pint in hand has been delegated to vice presidential nominee Paul Ryan, who hails from a brewery-rich state.

Vice president Biden drinks only non-alcoholic beer. So President Obama has compensated by releasing the formula for a brew he and a White House chef concocted.

Things have reached the point where the National Journal has analyzed consumer data to determine the politics of beer drinkers.  See below. 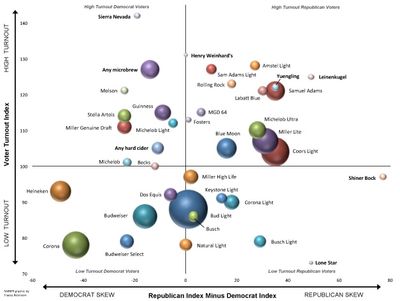 Coming next: boxers or briefs, and what they say about how you'll vote.

Turtles all the way down 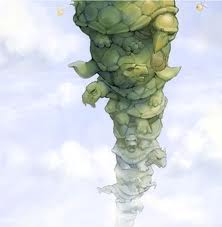 I was in Italy during the first presidential debate. Got up at 3 am to watch it online. Went to sleep when it was mercifully over, wondering what had happened to Obama.

I returned just a few hours before the vice presidential debate. Watched it through jet lagged eyes. Went to sleep when it was mercifully over, wondering what had happened to Biden.

Day-after punditry suggested Obama and Biden might have been respectively suffering from the effects of Ambien and Red Bull.

Polls suggested Obama's passivity made him the loser of the first debate. The polling jury is still out on the effectiveness of Biden's performance. But pundits seem uniformly focused on his facial expressions and other reactions, rather than on what he actually said.

I draw two conclusions from all this.

1. Emotional style counts for more than substance in "pseudo-events" like debates. Most of the reporting about both debates focused more on how things were said rather than on the substance of what was said.

2. What voters focus on largely reflects what the media focuses on. Media reporting about both debates was all about the participants' style and demeanor, from Romney's aggresiveness and Obama's passivity to Biden's arch smile and Ryan's need for constant hydration.

As economist Justin Wolfers tweeted last night, "Columnists (are) writing about what columnists will write about the debate, and it's turtles all the way down."

What a way to elect a president.