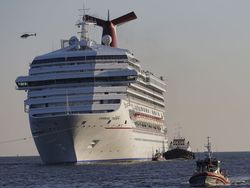 The Carnival Corporation has become Exhibit A in how not to handle the fallout from an operational crisis.

The passenger ship company's eponymous cruise line -- Carnival -- has had three cruise-ending mishaps at sea so far in 2013. In at least one case, the ship had to be towed back to port by the Coast Guard. Passengers were refunded at least part of their fares and offered a discount on later cruises.

But Carnival -- which pays little if any federal income taxes because it's incorporated overseas -- balked at reimbursing the Coast Guard for its help.

Rendering assistance at sea is a long-standing maritime tradition, it said. So there.

Of course, that generated more negative media at a time when the beleagured cruise line already had a surplus of it.

Eventually, it offered to make a voluntary payment to cover some of the costs.

But today's Wall Street Journal suggests that the bottom line cost of all the negative attention is still playing out.

That's the cost of not knowing how to handle public relations. In reaction -- at least in part to these results, I expect -- the company has split the job of CEO and Chairman in two. And it's hired a new head of PR.

Both are smart moves.