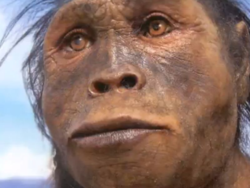 We're all the men and women our grandmothers wanted. More than they (or we) ever expected.

Three recent books spell it out.

Jonathan Haidt's The Righteous Mind reveals the inherited gut feelings that undergird our moral systems. And he shows how difficult it is to bridge the differences that result, especially in religion or politics.

Daniel Kahneman's Thinking, Fast and Slow distills 50 years of psychological research into a lucid explanation of how our decision-making is shaped, and sometimes dominated, by "cognitive illusions" passed down from generation to generation.

E. O. Wilson's The Social Conquest of Earth refashions the story of evolution to show how group selection is the driving force of human development.

Taken together, all three authors credit our common Grandma 8,000 or so generations removed for making us who we are. Grandpa played a role too, of course, but even he had a grandmother who anthropologists are pretty sure got the evolutionary cart rolling.

When she and her sisters dropped from the trees and began walking across the savannah, survival favored those who were disgusted by rotting meat and excrement. Those who weren't gorged themselves, got sick, and died.

Similarly, those who ran from snakes in the underbrush lived longer than those who decided to hang around to get a closer look.

Those who had a natural ability to work in groups brought down bigger game than the loners who set off on their own. Freeloaders and bullies were tossed out to fend for themselves.

A natural sense of fairness and an aversion to causing harm to group members contributed to the group's survival. As did an instinctual hostility towards strangers who could threaten the group or steal resources.

Offspring born with such instincts survived and passed them on to later generations, all the way down to us.

Some scientists believe that much of our behavior and most of our beliefs are the product of unconscious biases, inclinations, and instincts inherited from our evolutionary Grandma.

They are the fabric of our moral beliefs, the engine of our thinking, and the framework of our relationships. They were adaptations to the environment in Africa 140,000 to 200,000 years ago, even before the development of language.

And they did such a good job for Grandma and her offspring that they endure to this day.