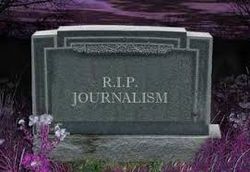 The CareerCast web site lists "newspaper reporter" as the second worst career to pursue in its 2014 report. That's just ahead of lumberjack, which ranked 200.

Ironically, there's a connection between the two. Newspapers are closing left and right, meaning the industry needs fewer reporters -- and newsprint, which is produced from the wood pulp in the trees lumberjacks fell. All in all, the Bureau of Labor Statistics estimates a 9% drop in logging positions by 2022, and a 13% decline in reporters.

At the other end of the scale, among the fastest growing jobs, is public relations. Some estimate it's will grow 12% over the next decade. In other words, PR will grow by about as much as journalism declines.

The disparity in this ratio concerns me, even though I spent virtually my entire career in PR (not counting the summer I wrote feature articles for the Suburban Press and Recorder in Natick, Mass.).