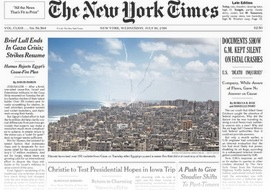 Ethics and PR sound like an oxymoron. But the headline and first three paragraphs of this front page story in the New York Times say all you need to know about the subject.

By REBECCA R. RUIZ and DANIELLE IVORY
The car crash that killed Gene Erickson caught the attention of federal regulators. Why did the Saturn Ion he was traveling in, along a rural Texas road, suddenly swerve into a tree? Why did the air bags fail? General Motors told federal authorities that it could not provide answers.

But only a month earlier, a G.M. engineer had concluded in an internal evaluation that the Ion had most likely lost power, disabling its air bags, according to a subsequent internal investigation commissioned by G.M.

Now, G.M.'s response, as well as its replies to queries in other crashes obtained by The New York Times from the National Highway Traffic Safety Administration, casts doubt on how forthright the automaker was with regulators over a defective ignition switch that G.M. has linked to at least 13 deaths over the last decade.

What was the response the Times found so wanting?

The company repeatedly found a way not to answer the simple question from regulators of what led to a crash. In at least three cases of fatal crashes, including the accident that killed Mr. Erickson, G.M. said that it had not assessed the cause. In another fatal crash, G.M. said that attorney-client privilege may have prevented it from answering. And in other cases, the automaker was more blunt, writing, “G.M. opts not to respond.”

As I've said before, I was never asked to lie when I did PR for AT&T. But learning the truth was not always easy. In any large organization, elements of the truth are closely held by multiple organizations, each with its own agenda. That's probably what happened at GM.

Ethical training for PR people has to start from that premise.