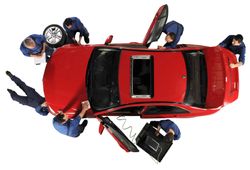 Last July, I took General Motors to task for its slow response to ignition problems that led to hundreds of deaths and injuries. I quoted a front page story in the New York Times that revealed the company knew more about the problem than it had been admitting.

In a book I co-wrote with Don Wright, Public Relations Ethics: How To Practice PR Without Losing Your Soul, I quoted another New York Times story that accused the company of not notifying customers it knew were eligible for compensation even though the application deadline was looming.

Those stories appear to have been accurate. GM extended the application deadline a week after the Times' story appeared. And while it is still unclear what GM's top executives knew about the ignition problem -- and when -- the company has responded aggressively.

It hired Kenneth Feinberg -- a lawyer who has developed a unique specialty in victim compensation.

In GM's case, he appears to have had an unusual amount of discretion. GM left all decisions on eligibility and awards to Mr. Feinberg. It didn't try to use the bankruptcy law to shield itself from compensating victims. And it put no upper limit on what it would pay.

Under Feinberg's direction, GM sent notices of the compensation program to 5 million current and former owners of vehicles with the faulty ignitions. Mr. Feinberg reviewed 4,343 claims, determined 399 were eligible for compensation, and awarded $594,535,752 in compensation. Over 90% of the awards were accepted by the claimants.

My opinion: GM's initial response reflected the turmoil of a company under siege, but in the end, it did the right thing. Feinberg's final report is here.