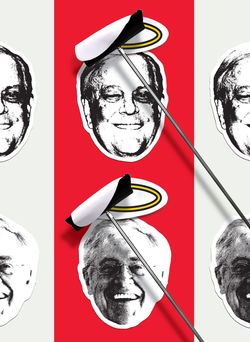 Jane Meyer's New Yorker piece on the Koch Brothers "rebranding" strategy does a nice job of describing what public relations can do while raising legitimate questions about whether it should be done.

On the tactical side, she puts her finger on the two factors that weigh most heavily on the Koch Brother's reputation: affinity and meaning. (Competence, the third leg of trust, is more-or-less a given when you're a billionaire.)

Affinity is not only likability, but also a sense that someone cares about you, that they identify with your cares.

Meaning is what people think you stand for, and Brooks diagnosed the brothers' weakness there as well.  The Democrats are “the fairness guys,” he said.“They’re the ‘helping-the-poor guys.’ Who are we? We’re the ‘money guys’!”

So the Koch Brothers have been on a tear to make themselves more likeable and broaden what they stand for. For starters, they hired former Burson-Marsteller executive Steve Lombardo as Koch Industries' chief communications officer.

Meyer apparently didn't speak to Lombardo, but she quotes extensively from a piece he wrote for O'Dwyer's newsletter in which he said the key to building a positive brand is to "to reach the public’s subconscious mind,” and the most effective “pathway” to the subconscious is “storytelling,” in part because it taps into emotions.

I can't argue with Brooks or Lombardo. I've said many of the same things in this blog.

But Meyer's article does raise a couple of ethical questions.

When does "tapping into people's subconscious" constitute emotional manipulation?

And assuming your "storytelling" is truthful in every sense of the word, what if its intent is misdirection, that is, to distract from a larger truth?

As to the first question, it seems to me that appealing to people's emotions is ethically legitimate as long as you don't overwhelm people's capacity to reason. Some political candidates have crossed that line in appealing to people's fear of such groups as immigrants and Muslims. I've seen no sign Koch Industries' re-branding campaign has been guilty of anything like that.

The second question is more problematic. Meyer says some Koch strategists want to reframe their free-market ideology as "a movement for well-being," all while admitting that their real goal is to eliminate regulation to raise profits. To me, that's where reframing becomes Orwellian spinning. On the other hand, she concedes that the brothers' efforts on behalf of criminal justice reform predate the rebranding effort.

So call me undecided on the ethics of working for the Koch Brothers.

As Harold Burson once told me, "I believe that every institution, every person is entitled to have public relations representation,” but “I do not believe that I am compelled in any way or manner to be the one who provides that representation.”

In the end, the ethics of any engagement depends on a client’s goals, as well as the way practitioners try to achieve them. If a client’s purpose is unethical, nothing a practitioner does can compensate.