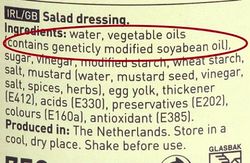 The state of Vermont wants food containing genetically modified organisms (GMOs) to be clearly labeled. The food industry worries that will feed paranoia about the safety of GMOs and wallop their bottom line.

On the one hand, while it's premature to declare a scientific consensus on the safety of GMOs, the World Health Organization, the American Medical Association, the National Academy of Sciences, and the American Association for the Advancement of Science have all declared there’s no good evidence GMOs are unsafe. Hundreds of studies back up that conclusion.

If the risks are unclear, proponents can point to clear benefits. Genetically modified cotton, for instance, contains genes from a bacterium found naturally in the soil. The bacterium produces a toxin that targets cotton bollworm, a pest that infests millions of acres each year. That makes it unnecessary to spray the GMO cotton crops with insecticides, many of which are carcinogenic.

Furthermore, nearly half the world’s soybeans and a third of its corn are products of biotechnology. Since genetically modified crops were first planted in 1996, humans have consumed trillions of servings of foods made from them without a single documented case of illness as a result.

But other experts take a more measured approach. "If used wisely, GMOs could ... alleviate hunger and disease worldwide," according to the educational web site of Nature magazine. "However, the full potential of GMOs cannot be realized without due diligence and thorough attention to the risks associated with each new GMO on a case-by-case basis."

And an industrial-strength lobby is pressing the case that all GMOs are dangerous to our health, the environment, and God's plan. Google "gmo." The majority of the results on the first page will be anti-GMO of varying degrees of hysteria.

So what's an ethical company to do?

Where there's a clear scientific consensus on a matter of public interest, as in the advisability of childhood vaccinations and the validity of climate change, ethical considerations compel us to recognize and honor it. Where no consensus exists, it obligates us to open and respectful dialog.

So companies like Mars, General Mills, and Campbells are free to press arguments that genetically modified foods are safe. They're also free to continue using them. And by voluntarily labeling their products as containing GMOs, they are respecting their customers' right to know what's in the products they're buying and consuming.

But a company's ethical obligation doesn't end there. Only open and clear communications can keep an ingredient label from becoming a baseless warning.