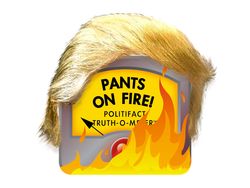 Politifact reports that nearly half (47%) of what Donald Trump has been saying on the campaign trail is completely false. Another 21% is so outlandish it's scored as "pants on fire."

From what I can see, the folks at Politifact do their job as objectively and carefully as anyone could. But the accuracy or truthfulness of Trump's rhetoric is really beside the point.

Anything a politician says has three levels of meaning -- semantic, pragmatic, and symbolic.

The semantic is the literal meaning of the words, whether they conform to reality and are factual. That's what Politifact is measuring.

The third meaning is symbolic. It's what the candidate's words signify to his listeners, what they mean beyond their dictionary definitions. In Trump's case, that's the real meaning. Whatever he says is always clear enough for a 4th grader to understand. It's brash and direct. Trump says what his followers are thinking. His words say "I'm with you."

Do Trump supporters really think he can clear the country of undocumented immigrants in two years or get Mexico to pay for a border wall? No. And they don't think he does either. It's enough that he's expressing the same frustration and anger that they've been experiencing.

They're so fed up, they're willing to take a flyer on a guy with a bad combover, hot wife, and hefty bank account. At least he'll shake things up.

The ethics of Trump's campaign has less to do with how well his political statements conform to reality than with their larger meaning. There's not much room for nuance in a political speech. For example, it's not true that under the Iran nuclear deal, "we give them $150 billion, we get nothing," as Trump claimed in his Florida victory speech. In reality, the money was already Iran’s to begin with, just frozen in foreign bank accounts under economic sanctions. In return for releasing it, Iran curbed its nuclear program as confirmed by independent experts.

But what Trump could have meant is that we didn't get enough for releasing the embargoed money, which is more opinion than statement of fact.

If that sounds like an unnecessarily generous interpretation, it's simply meant to put more emphasis on the larger ethical issue at play in Trump's campaign -- his lack of respect for voters' intelligence and his disregard for the consequences of his divisive rhetoric.

Trump has assumed no responsibility for the violence levied on protesters at his rallies. And he continues to campaign in sound bites and heated rhetoric, offering little substance on policy or programs. He's pandering to voters' resentments, reinforcing them rather than addressing their causes.

That's the biggest ethical lapse of all.