From Barnum to Trump 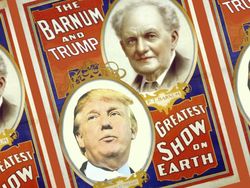 Public Relations people like to think they not only outlived P. T. Barnum, they outgrew him and his outrageous publicity-seeking techniques.

Those techniques live on in the more juvenile corners of the practice. And in one presidential campaign.

Strictly speaking neither P. T. Barnum nor Donald J. Trump can be categorized as PR people. But so many techniques of the craft have been so central to their success, they serve as appropriate and rich case studies.

Barnum and Trump share more than the same hairline, less comb-over. They're both teetotalers, though Barnum came to sobriety after a period of dissolution and, while Trump doesn't drink wine or vodka, he peddles them.

Barnum entered politics late in life, serving as a state legislator and as mayor of Bridgeport, Conn. Trump was in his late 60s when he decided he wanted to be president.

They both amassed great fortunes. Barnum was one of the first millionaires in the U.S. Trump claims to be worth $10 billion. They both also made good use of the bankruptcy statutes.

Both have been best selling authors. Trump wrote The Art of the Deal, telegraphing his approach to domestic and international issues. Barnum wrote the more straightforwardly titled The Art of Money Getting.

And they can both credit much of their success to their genius at generating publicity. In fact, just 4 days before he died, Barnum wrote a friend, “All I have, I owe to the press.”  Trump could say the same, although he would probably add “those disgusting, dishonest human beings.”

Disgusting or dishonest, Trump knows how to deal with the media. His strategy is fairly simple and Barnumesque in its own way. "One thing I’ve learned about the press is that they’re always hungry for a good story, and the more sensational the better," he wrote in The Art of the Deal. "If you are a little different, or a little outrageous, the press is going to write about you."

And write they do. Sometimes, just turning on their TV cameras and watching him in front of adoring crowds.  Over the course of his campaign, Trump earned nearly $2 billion worth of media attention — twice Hillary Clinton’s $746 million, more than all the other GOP candidates combined, and 190 times more than he spent directly.

Now, you would think volunteering for all that attention, Trump has been playing with fire. But he learned how to handle the media in his real estate days, as he explained in his best seller. "When a reporter asks me a tough question, I try to frame a positive answer, even if that means shifting the ground," he wrote. "If someone asks me what negative effects the world’s tallest building might have on the West Side, I talk about how New Yorkers deserve the world’s tallest building."

In the trade that's called "bridging" or evading a question by answering the question you wish had been asked. Like Barnum, who posted signs reading “this way to the egress” to keep people moving through his sideshows, Trump is a master of misdirection.

He has also been more prolific than any other candidate in “shared media,” accumulating about 7 million Twitter followers and tapping out more than 32,000 Tweets and re-Tweets. That’s more significant than it seems. At the beginning of the 20th century, people like Walter Lippmann believed newspapers played a key role in telling people what to pay attention to and how to think about it. In the 21st century, social media has usurped that role.

Like Barnum, Trump knows what ordinary people want. "I play to people’s fantasies," he wrote. "People want to believe that something is the biggest and the greatest and the most spectacular. I call it truthful hyperbole. It’s an innocent form of exaggeration — and a very effective form of promotion." In the trade, that's called "spinning," making the good look better and the bad look good. 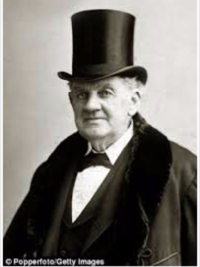 Barnum called it “Humbug” -- "putting on glittering appearances by which to suddenly arrest public attention and attract the public eye and ear." In fact, he called himself the "Prince of Humbugs.” He would have seen kindred royalty in Donald Trump.

Few of the attractions Barnum promoted came close to the outrageous buildup he gave them, but people were so entertained, they didn’t feel deceived. The lie was part of the entertainment. He sewed the body of a fish to the torso of a monkey and presented it as “a scientific curiosity” called the Fee-Jee Mermaid.

More troubling, Barnum’s “Humbug” exploited the prejudices, racism, and belief in eugenics common in his day. He promoted the deformed, disabled, and different -- like “General” Tom Thumb, Jo Jo the Dog-Faced Boy, and conjoined twins Cheng and Eng. He promoted a mentally disabled black man as “Pinhead,” the missing link between man and ape. And even though he was an abolitionist, he bought a slave and presented her as Washington’s 161-year-old nanny.

In a way, Trump is following the same playbook, exploiting people’s fears and anger. He appeals to people who feel disenfranchised by globalization, stagnant wages, and demographic change. They like his brashness and directness. Whatever he says is always clear enough for a 4th grader to understand. And it’s expressed in simple, angry terms that can fit in a Tweet with plenty of room for exclamation points.

It’s a proven formula. Anger and fear are easy to evoke because they come from people’s unconscious. And once aroused, those feelings are immune to rational argument.  People who are scared and angry don’t want someone to tell them they shouldn’t be. They want someone to listen, play back what they’re saying, and give them an easy, quick solution.

As unlikely as it may seem, blue collar billionaire Donald Trump has become that person.  He doesn’t talk like a politician, but says what the guy on the next bar stool is thinking but afraid to say. He’s “authentic.”

Politifact reports nearly half (47%) of what Trump has been saying on the campaign trail is completely false. Another 21% is so outlandish it's scored as "pants on fire.”  In 4.6 hours of Trump speeches and press conferences during one week in mid-March, Politico found more than 5 dozen untrue statements, or one every five minutes.

Despite this, polls say 60% of Republicans think Trump is honest and trustworthy. How can that be?

His supporters aren’t listening to the semantic meaning of what Trump is saying; they’re listening to its emotional and symbolic meaning -- what his words mean to them, beyond their dictionary definitions.

For example, in his Florida victory speech, Trump said that under the Iran nuclear deal, "we give them $150 billion, we get nothing." In reality, the money was already Iran’s to begin with, just frozen in foreign bank accounts under economic sanctions. In return for releasing it, Iran curbed its nuclear program and submitted to independent monitoring.

But Trump’s supporters knew what he meant is "we didn't get enough for releasing the embargoed money." That’s more opinion than statement of fact. Who's going to quibble about the details?

Do Trump supporters really think he can clear the country of undocumented immigrants in two years, or get Mexico to pay for a border wall? No.  And they don't think he does either.  He’s just underlining the threat of so-called “illegal immigrants” and promising to be ruthless in addressing it.

Like Barnum, Trump is an entertainer, playing a role. He has less in common with politics than with professional wrestling.

And like performers in World Wrestling Entertainment, Barnum and Trump have operated in a largely fact-free zone. Sometimes, their free-wheeling way with the truth is relatively innocent puffery delivered with a wink, as when Barnum claimed something was “the greatest" or "the rarest.” Or when Trump declared he has "one of the world's best memories."

But Barnum also perpetuated the basest prejudices toward people who were disabled, mentally challenged, or of a different race. Barnum’s so-called “freaks” may have been complicit in his exploitation of them, but it’s hard to justify the social cost. 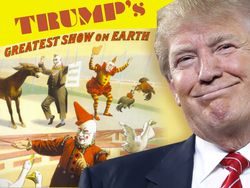 Trump’s major ethical failing is similar. He demonstrates a lack of respect for voters by pandering to their resentments, validating and reinforcing them rather than seriously addressing their underlying causes.

He campaigns in heated rhetoric, offering little substance on policy other than promises he “could get a better deal.”

He disregards the consequences of his divisive rhetoric, accepting no responsibility for violence at his rallies but offering to cover the legal fees of anyone arrested for roughing up protesters. Or at least did until it looked like the bills would keep piling up.

The way Barnum and Trump have practiced public relations may have filled their bank accounts, it may even get one of them a nomination or, God forbid, the presidency, but it is  literally de-meaning because it robs whole groups of people of meaning, reducing them to a cliché, a punchline, or a menace.

That’s the real danger in the three-ring circus surrounding Trump. At best, it’s trivial and superficial humbug designed to get attention.  At its worse, it cynically exploits voters’ resentments towards whole classes of people. It is de-meaning, which is the darkest use of public relations.