Home Archives Profile Subscribe
Who is PR?
What PR can learn from j-school 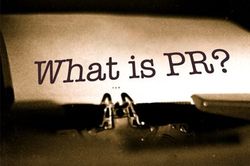 I'm either on a roll or in a rut. Yesterday's posting tried to explain who is practicing public relations. Today's tries to describe what they do, without the benefit of Census Data.

Not that the good folks over at the Census Bureau didn't take a whack at defining public relations for the purposes of their survey.  They did, and here it is: "Engage in promoting or creating an intended public image for individuals, groups, or organizations. May write or select material for release to various communications media."

Add that to the estimated 500 formal definitions various practitioners and academics have devised. There’s no canonical definition of public relations. It’s 117,499 people doing essentially the same thing and explaining what they’re doing in 117,499 different ways.

Underlying all these definitions are two major theories.

The first is the horn-blowing, publicity-centered version of public relations portrayed in popular media -- the world of flacks and spin doctors. Academics call that “asymmetrical symbolic interpretation.” Its goal is to inform and persuade. Or, as the Census Bureau put it, to "create an intended public image."

That certainly describes the first 100 years of PR’s history, which was largely concerned with informing and persuading people of something.

But “persuasion” has always made some academics uncomfortable. So they’ve developed a theory that is more genteel and socially redeeming.  They call it "two-way, symmetrical or dialogic communications." Its goal is to mediate interests.

The idea is that PR can help an organization enter into a dialog with its publics to build common agreement on issues of mutual concern. It’s a notion rooted in a sociological concept called systems theory. But it shows up in academic journals much more than in practice, where it seems concentrated in highly regulated industries or non-profits.

In the real world, public relations is practiced along a continuum, from sharing information to mediating interests. Practitioners move between the two ends of this continuum at different gaits. But they share a common goal, rooted in another sociological theory – social construction.

The idea of social construction is that people’s understanding of the reality around them is heavily influenced by their environment. What we call the "meaning" of words and symbols is shaped by the context in which they are encountered. And that meaning becomes the currency with which information is shared, minds are persuaded, and interests are mediated.

In a very real sense, public relations is all about creating meaning.

Joye Gordon, a PR professor at Kansas State University, latched onto this back in 1997 and suggested PR is "active participation in the social construction of meaning." Think about it: isn't that what PR is all about?  We’re working with people’s current feelings and understanding to construct a new meaning. Ideally, a meaning favorable to our client or brand.

Meaning isn't imposed on others; it's created in a collaborative process. It's not pulled out of the air like a slogan; it's constructed from our client's actual capabilities and the public's real needs, aspirations, and values.

Meaning grows out of a brand's purpose, which is essentially the job it promises to do for customers. That job can be functional, emotional, or aspirational. But it has to be real and something customers value.

As marketing professor Philip Kotler put it, purpose has to serve both customer and society. "Marlboro was the most popular brand of cigarettes," he points out. "It delivered taste and high satisfaction. But it also could deliver a heart attack, liver damage and 'bads' to others in the smoke vicinity."  Not exactly beneficent.

So that's what public relations people do: they participate in the social construction of meaning around a client or brand's beneficent purpose.