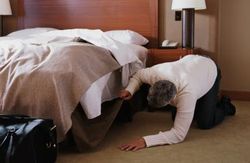 Opposition research is one of those sexxy-sounding hardball tactics politicians use and some corporate CEOs covet when they're under attack. The temptation to dip your toe into it is almost too hard to resist, particularly when your boss suggests it's what "the pros" all do.

Edelman’s client had proposed to construct an oil pipeline across Canada. Greenpeace, which opposed the pipeline’s construction, somehow got its hands on a copy of Edelman’s public relations strategy, which called for developing “detailed background research on key opposition groups,” and posted it online. That prompted the New York Times to characterize the whole affair as an attempt “to spread any unflattering findings about the opposition.”

Meanwhile, as reported by Buzzfeed, a senior Uber executive attending an industry dinner “outlined the notion of spending ‘a million dollars’ … to dig up dirt on its critics in the media—and specifically to spread details of the personal life of a female journalist who has criticized the company." The executive who made the suggestion later explained he thought he was speaking “off the record.” He said he “regretted [the remarks] and that they didn’t reflect his or the company’s views.”

There is nothing unethical about analyzing what reporters have written to better understand what they think of your company and its industry. Nor is it wrong to track public details about a reporter’s life or information he or she is willing to share, such as a spouse’s name, children, alma mater, and hobbies. Such information can help build a stronger personal relationship with the reporter. But digging for embarrassing information is clearly unethical.

It is a violation of the reporter’s privacy. It muddies the waters of public discussion by casting irrelevant aspersions on the person reporting it. It's not responsible advocacy by any measure.

The key word here is “relevance” and that could be the safe harbor for Edelman.

If its background research was intended to reveal relevant information about the pipeline’s opponents, such as conflicts of interest or extreme positions they have taken in the past on similar projects, it could be ethical.

As Edelman’s own plan suggested, “To make an informed decision on this project, Canadians need to have a true picture of the motivations not only of the project proponents, but of its opponents as well.”

Ethical or not, the publicity embarrassed TransCanada and it parted ways with Edelman within a matter of weeks. The Uber executive was publicly rebuked by the company's CEO for remarks that "showed a lack of leadership, a lack of humanity, and a departure from our values and ideals." Thrown under the Uber or not, he's still with the company.