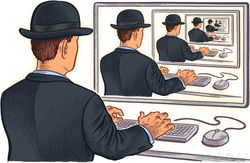 Psychologists and social scientists have long known that when people of like mind gather to discuss a controversial issue they emerge with even more extreme views.

The phenomenon is known as group polarization.

The fragmentation of media has created "suffocating echo chambers" in which our pre-existing views are reinforced and magnified.

Living in such an echo chamber can also make us deaf to information that contradicts the noise reverberating in our head.

Fox News and MSNBC may be the most obvious examples of media leaning in one political direction of another. But we all have personal echo chambers courtesy of platforms like Facebook, Twitter, and even the "comments" sections accompanying some articles in the Times and almost all in the Wall Street Journal.

Although the Times' Nick Kristoff once suggested "the echo chamber effect is disproportionately a problem on the right," he conceded that the left often lives in a similar cocoon. But even that mild concession was too much for many readers who objected to what they called a "false equivalency."

"If you think MSNBC is the left, Mr. Kristof, you've been watching too much Fox News. MSNBC is what used to be called the center," wrote Kidipede of Portland, Oregon.

Apparently finding the center of an echo chamber is impossible when you're in it.

Not a problem for tpaine of New York City who wrote, "I see no hope of compromise between a Party that beleives it is God - and, in fact, booed the mere mention of the word three times at their North Carolina National Convention - and a Party that knows 'God's Word' and the Laws of Nature and Economics are eternal."

All this illustrates the difficulty of breaking out of our echo chambers. So I was intrigued by an old Collin Raney post in C-Notes. It offered a blueprint for at least getting a hall pass from the echo chamber. 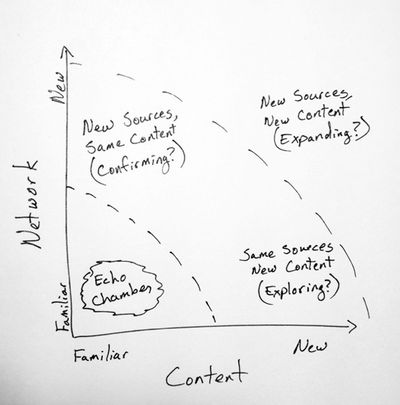 The echo chamber "seems to generally occur when you’re reading too much of the same content from the same sources/network," Raney observed. "Changing either of those aspects could help you along, finding content through new sources or possibly seeing content from a new network."

He points out that echo chambers are singular and personal. Content that simply reinforces my beliefs might be expansive for my friends. "To counter the echo chamber," he advises, "we each need to find a personal balance in the content we consume."

I'm going to follow Raney's advice and start reading the Wall Street Journal editorial page. In time, I'll work myself up to Karl Rove's column. And then, who knows?