The book comes out in June.  Can the pill be far behind?

Details of the study have been reported everywhere from the U.K.'s Daily Telgraph to Gizmodo so I won't repeat the details here, except to note that the sample size was quite small, all the participants were men, and no one knows if the effect was limited to racist attitudes or was more generalized.

However, the results are not too surprising on at least one dimension -- most bias springs from fear and, in addition to lowering blood pressure, the drug tested has been used to reduce anxiety and panic for years.

The drug acts both on nerve circuits that govern automatic functions such as heart rate, and the part of the brain involved in fear and emotional responses. So there may be a logical connection.

Can a drug to make people OtherWise be far behind?

I give an annual talk on ethics and nearly always come away having learned something from the participants.

The most heated discussions often revolve around the difficulty of setting standards that are universal and free of exceptions. It's not hard, for example, to imagine circumstances in which lying or killing might be acceptable.

"Torturing children" was a candidate for behavior that we all agreed could be universally condemned as unethical. But recently I learned that corporal punishment is legal in 21 states and practiced quite frequently in 13.

That's too close to "torturing children" for my taste. But like many people, I find it difficult to argue that questions of morality should be as easy to resolve as questions of scientific fact.

Sam Harris, author of Letter To A Christian Nation, bravely made the leap from "values" to "facts" in a recent Ted conference presentation. I'm not convinced the bridge he built can carry the full weight of his argument, but if you have any interest in the issue, it's worth watching the video above.

Newsweek's latest public opinion poll demonstrates how difficult it is to figure out what people really think about any important issue.  And how relatively easy it is to shape their opinions in the first place.

Item: when Newsweek asked for their "overall opinion of Obama's health care reform plan," 49 percent opposed it, 40 percent were in favor and 11 percent didn't know or had no opinion.

But in a subsequent question, significant majorities said they favored specific proposals to change the health care system.

Of course, not all specific proposals were popular.

But the real kicker came in the next question:

"Now please think about the proposals I just described to you.  ALL of these proposals are included in Barack Obama's health care reform plan. Having heard these details, what is your OVERALL opinion of Obama's plan -- do you favor it or oppose it?"  (Emphasis in original.)

48 percent now favored the plan, 43 percent opposed it, and only 9 percent didn't know, practically a reversal of the answers to the question when it was first posed.

Obama's current plan doesn't include the so-called "public option." Furthermore, almost as if the White House read the poll results, Obama's new plan lowers the tax on Cadillac plans and reduces the fine for not carrying health insurance.

But what I found interesting is how volatile people's opinions appear to be on this issue.It reminds me of Walter Lippmann's admonition that most people have their minds made up long before they come in contact with any relevant facts.

Opinions are the product of emotion filtered through reason, not the other way around.In this case, the very controversy surrounding the issue helped form their opinions.  Talk of "a government takeover of health care," "death panels," "two and a half trillion dollar price tags," and "bureaucrats dictating care to doctors" framed the issue for most people.  Even when factual data put some of these charges to rest, people were left with the negative feelings the original attack elicited.

The original question in the poll allowed people to express their emotional opinion, but the follow-up on the specific elements of the reform plan put their rational brain into gear.  And it was still engaged when the first question was essentially asked again.

People aren't totally irrational, but they're not automatons either.  Ignoring their emotions is a formula for disaster.

That's a lesson Mr. Toyoda should keep in mind as he addresses his company's current crisis.  It's about more than sticky accelerators, wayward floor mats and electronic gremlins. 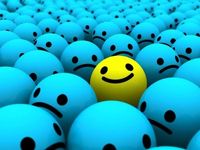 Seeing someone perform a virtuous deed (especially if they are helping another person), makes us feel good, often eliciting a warm, fuzzy feeling in our chest.

This positive, uplifting emotion, known as "elevation," might make us feel great, but is it enough to get us to go out and perform good acts ourselves?

According to new findings reported in PsychologicalScience, a journal of the Association for Psychological Science, the answer may be yes.  Learn more in this "Science Daily" report. Embodied cognition is a hot new field that considers how abstract concepts like "power," "time," and "goodness" are processed not just in our brains, but also by our bodies.

The findings have broad implications for all forms of communications and marketing. For example, a study at Gettysburg College in Pennsylvania, showed that whether someone's photo is positioned at the top of a screen or at the bottom affects how powerful and attractive he or she is perceived to be by the opposite sex.

When people think of power differences, they literally think of spatial differences too. Powerful people are thought to be those who stay "at the top," while the less powerful are "below."

In the Gettysburg study, men were 1.8 times more likely to find the same woman attractive if her photo appeared at the bottom of the screen rather than at the top. Women were 1.5 times more likely to find men attractive if their photo appeared at the top. This may help explain why CEOs ten to be tall and why wives are taller than their husbands in only one out of 750 married couples.

The New York Times reports on a study in the journal Psychological Science that shows that people actually lean forward when thinking of the future and lean back when pondering the past.

Others have discovered that the smell of Windex can prompt people to donate more to charity.  (No, Windex didn't sponsor the study.  You can read it here.)  Books we are told are "important" seem to weigh more than other books of the same size.

It seems that our figurative language (e.g., "the stain of sin") has roots in the way our body actually processes information. Priceless: The Myth Of Fair Value (And How To Take Advantage Of It) is William Poundstone's eleventh nonfiction book and a prime example of two trends we will hear and read a lot more about in business circles -- evolutionary psychology and neurobiology.

We may all think that we're rational beings, but the truth is that we are the products of evolutionary forces that prepared us for a very different environment.  In fact, many of our daily decisions are made at levels below our conscious awareness but in full view of a functional magnetic resonance machine.

I've been gathering material for a new book on these subjects and will report examples in this space over the coming months. Many of the latest findings have significant implications for (and applications in) marketing, finance, human resources and every other business function.  Not to mention day-to-day life, as Poundstone demonstrates even on his book jacket, which is cleverly designed to incorporate a price tag.  The book's original price is listed there as $599.99.  In fact, it really sells for about $27, which seems like a steal thanks to the "anchoring effect" Poundstone describes so effectively in the book itself.